At PreVeil we often find ourselves explaining to our customers the concepts of how public and private keys work. We thought it would be helpful to discuss what these keys are, what they aren’t, and how they work.

Public and private keys: an example

Bob wants to send Alice an encrypted email. To do this, Bob takes Alice’s public key and encrypts his message to her. Then, when Alice receives the message, she takes the private key that is known only to her in order to decrypt the message from Bob.

The difference between public and private keys

Public keys have been described by some as being like a business’ address on the web – it’s public and anyone can look it up and share it widely. In asymmetric encryption, public keys can be shared with everyone in the system. Once the sender has the public key, he uses it to encrypt his message.

Each public key comes paired with a unique private key. Think of a private key as akin to the key to the front door of a business where only you have a copy. This defines one of the main differences between the two types of keys. The private key ensures only you can get through the front door. In the case of encrypted messages, you use this private key to decrypt messages

Together, these keys help to ensure the security of the exchanged data. A message encrypted with the public key cannot be decrypted without using the corresponding private key. The public and private key are not really keys but rather are really large prime numbers that are mathematically related to one another. Being related in this case means that whatever is encrypted by the public key can only be decrypted by the related private key.

A person cannot guess the private key based on knowing the public key. Because of this, a public key can be freely shared. The private key however belongs to only one person.

There are several well-known mathematical algorithms that are used to produce the public and private key. Some well-respected algorithms include:

Public key cryptography provides the basis for securely sending and receiving messages with anyone whose public key you can access.

Typically, we use the recipient’s public key to encrypt the data and the recipient then uses their private key to decrypt the data. However, using the scheme of digital signatures, there’s no way to authenticate the source of the message. Mike could get a hold of Alice’s public key (since it’s public) and pretend that Bob is the person sending a message to Alice. 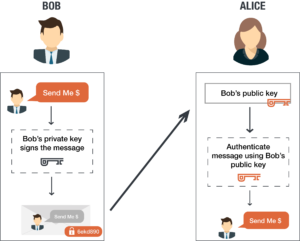 The Diffie Hellman key exchange demonstrates an example of how users can securely exchange cryptographic keys over a public channel.

In the past, secure encrypted communication required that the individuals first exchange keys by a secure means such as paper key lists transported by a trusted courier. The Diffie–Hellman key exchange method allows two parties that have no prior knowledge of each other to jointly establish a shared secret key over an insecure channel.

PreVeil uses the Diffie Hellman key exchange to enable Web PreVeil. Web PreVeil is a browser based end-to-end encrypted email service that allows users to easily access their secure email account on the web without any software download or any passwords to remember.

Here’s a video to explain how this works:

By using a public and private key for encryption and decryption, recipients can be confident that the data is what the sender says it is. The recipient is assured of the confidentiality, integrity and authenticity of the data.

Confidentiality is ensured because the content that is secured with the public key can only be decrypted with the private key. This ensures that only the intended recipient can ever review the contents

Integrity is ensured because part of the decryption process requires checking that the received message matches the sent message. This ensures that the message has not been changed in between.