Our new DFARS whitepaper details how many defense contractors seeking compliance with the DFARS Interim Rule
can quickly and easily raise their SPRS score by nearly 40 points. Check out the whitepaper summary and download your copy today.

End-to-end encryption is a secure and private method of communication where the only people who can access the data are the sender and the intended recipient(s). Using end-to-end encryption prevents hackers or unwanted third parties from accessing messages or files on the server.

In true end-to-end encryption, encryption occurs at the device level. That is, every message or file is encrypted before it leaves the phone or computer and isn’t decrypted until it reaches its destination. As a result, hackers cannot access data on the server because they do not have the private keys to decrypt the data. Instead, keys are stored with the individual user on their device which makes it much harder to access an individual’s data.

How does end-to-end encryption work?

The security behind end-to-end encryption is enabled by the creation of a public-private key pair. This process, also known as asymmetric cryptography, employs separate cryptographic keys for securing and decrypting the message. Public keys are widely disseminated and are used to lock or encrypt a message. Private keys are only known by the owner and are used to unlock or decrypt the message.

In end-to-end encryption, the system creates public and private cryptographic keys for each person who joins.

Let’s say Alice and Bob create accounts on the system. The math behind end-to-end encryption provides each with a public-private key pair.

Alice wants to send Bob an encrypted message. To do this in an end-to-end encrypted system, Alice digitally pulls down Bob’s public key from the server and encrypts her message to him with his public key. Then, when Bob receives the message, he takes the private key on his device to decrypt the message from Alice and reads it. 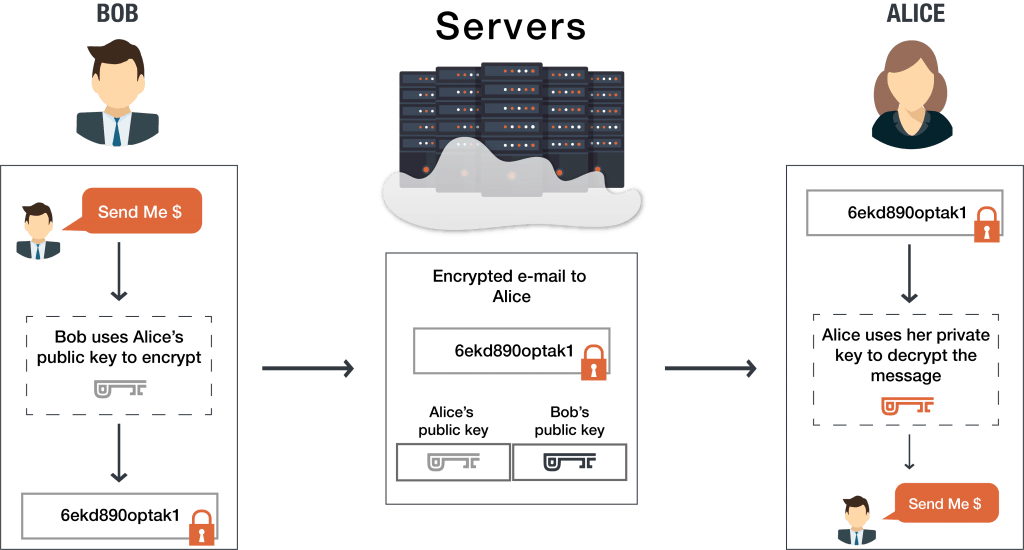 When Bob wants to reply, he simply repeats the process, encrypting his message to Alice using Alice’s public key.

Why end-to-end encryption is important

Unlike most commercial email and file sharing services, services that use end-to-end encryption can never read your data because data is never decrypted on the server. Indeed, your data is most vulnerable place when stored on a disk, in memory or on some device in the cloud.

Services like Gmail, Yahoo or Microsoft enable the provider to access the content of users’ data on its servers because these providers hold copies to the decryption keys. As such, these providers can read users’ email and files. In Google’s case, its possession of decryption keys has enabled them in the past to provide the Google account holder with targeted ads.

End-to-end encryption securely transfers data between endpoints. However, an intruder can sit on the server and impersonate a recipient by substituting the intruder’s public key for the recipient’s. In this way, messages are encrypted with a key known to the attacker.

However, by using a system of authentication, this challenge can be minimized. This authenticity is provided by having Bob digitally sign the email to Alice using his private key. When Alice receives the message from Bob , she can verify the digital signature on the message came from Bob by using his public key. As the digital signature is based on Bob’s private key, Bob is the only one who could create the signature. As such, there is no way to spoof it. Lest you think this example of tampering with messages is theoretical, you need to only look to the example of the eFail attack in 2018 in which it was shown that attackers could alter a message by injecting malicious code into the body of the email. This attack was enabled because the email messages sent through OpenPGP and s/MIME did not require checking if the message had been altered before the recipient opened the message.

Can end-to-end encryption be hacked?

Security practitioners often point out that security is a chain that is only as strong as the weakest link. Bad guys will attack the weakest parts of your system because they are the parts most likely to be easily broken. Given that data is most vulnerable when stored on a server, hackers’ techniques are focused on gaining access to servers.

As the Department of Homeland Security has written:

Given that attackers will go after low hanging fruit like where the data is stored, a solution that does not protect stored data will leave information extremely vulnerable.

As the DHS goes on to state in its report,

Attacking the data while encrypted is just too much work [for attackers].

The movement of data storage to the cloud from on premise storage has made data management a much easier job for IT administrators. The cloud is scalable, cost-effective, easy to manage, and accessible to a wide range of devices. At the same time, the cloud is also vulnerable to attack because it represents a huge repository of information. Even a minor misconfiguration of a cloud server can make the stored data vulnerable.

Many security companies try to build ever taller walls to protect the data on the server. However, by using end-to-end encryption, data can still be secure even if the cloud is breached. This protection is ensured because end-to-end encrypted data can never be decrypted in the cloud since the keys for decryption are not stored there. If a attacker breaches a server, all they will get is gibberish.

What are the advantages of end-to-end encryption?

The NSA recently issued guidelines for using collaboration services. At the top of the NSA’s list was the recommendation that collaboration services employ end-to-end encryption.End-to-end’s inclusion in the NSA’s list highlights its shift to the mainstream by an organization known to seek the highest levels of security for themselves and their technologies. The NSA notes that by following the guidelines it defines, users can reduce their risk exposure and become harder targets for bad actors.

The advantages of end-to-end encryption can be summarized as follows: